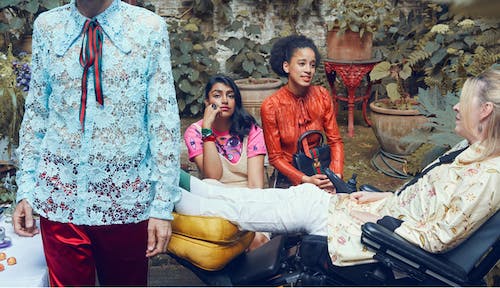 Fashion has the power to change culture.

This image is from my project for 2017 Kering Sustainabilty, in which I was a finalist. 'The fashion campaign as an agent of change' explored the use of the fashion campaign and particularly of Gucci’s cultural capital to promote ideas of social responsibility, sustainability and empathy. It addressed both emotional and environmental sustainability, by recognising human behaviour and perception as key aspects.

The theoretical framework for the project employed key psychological studies such as social learning theory, social cognition theory, conditioning and modelling in advertising. For the final presentation I created photoshoot that illustrated the potential use of these in a seasonal Gucci campaign. I have reconstructed styles from previous seasons alongside current ones to endorse the idea that wearing an “old look” is valid and desirable. The cast was chosen to portray the Gucci clientele which is multicultural and diverse.